Media U: How the Need to Win Audiences Has Shaped Higher Education By Mark Garrett Cooper and John Marx 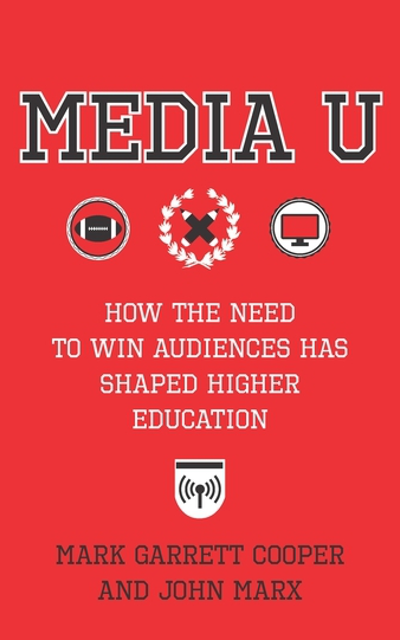 Tell us about your new book. What is its central project?

Mark Garrett Cooper and I show how the need to create an audience stamps each of the university’s steadily proliferating disciplines, shapes its structure, and determines its division of labor. In the United States of America, we explain, research universities exist neither to produce nor to curate knowledge but to connect people by means of it. They are media institutions.

What got you started thinking about this set of problems in this way?

A profound dissatisfaction with histories of the university that pit the university’s “true” or “core” academic mission against football, movies, television, the internet, mobile phones, or any other commercially successful, widely adopted media form. For well over a century, such rhetoric of opposition has belied a far different dynamic, one in which the university learns to collaborate with and appropriate commercial media rather than defend against their supposedly pernicious influence. The fundamental goal of the American research university has been to cultivate audiences and convince them of its value, a project that we became convinced only a media history can reveal.

If you could pair your book with one other text, what would you recommend? Why?

Cathy Davidson's The New Education. She rightly calls us to rise above departmental politics and the tribalism of disciplinary debates. Instead, she thinks we should be talking with our neighbors and our elected representatives about the advantages of eliminating letter grades, the virtues of learner-centered, collaborative, and project-based pedagogies, the perils of specialization, the damage that departments do by stifling change, the promise of educational technology if divorced from the profit motive, the myth that STEM degrees lead directly to career success, and, of course, the need for public reinvestment in higher education.

Media U comes out in August from Columbia University Press. You can find it here.