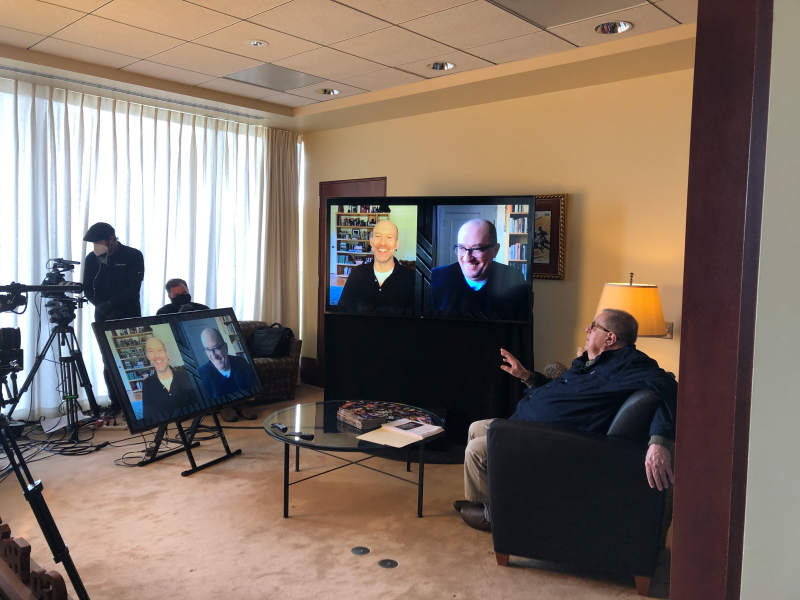 Two of the most visible and accomplished of our creative writing masters program graduates return to campus (virtually) this week for a special reunion with mentor emeritus Professor Jack Hicks.

Christopher Markus and Stephen McFeely have collaborated to write six installments in the Marvel Cinematic Universe, including Avengers: Infinity War and Avengers: Endgame. In the summer of 2019, Avengers: Endgame broke a 10-year-old record held by Avatar to become the highest-grossing movie of all time, raking in nearly $2.8 billion worldwide.

This Friday, Nov 20, 2020 @ 4:00pm - 5:15pm, Markus and McFeely join Chancellor Gary May and Professor Hicks for a virtual Chancellor’s Colloquium. The image above offers a behind-the-scenes peek at the event.

Markus and McFeely both earned master’s degrees in creative writing in 1996, and have since gone on to co-write The Life and Death of Peter Sellers and The Chronicles of Narnia film franchise, as well as Marvel films.

You can read more about the pair in “Marvelous Match,” from UC Davis Magazine. There, they talk about learning to work together while in the English Department’s creative writing program. “In our spare time, we wrote most of a very bad thriller,” said Markus. “It was sort of patterned after Seven, but much worse.” Added McFeely, “Chris is right, it wasn’t very good. But the process went well enough that we decided to move to Los Angeles after we got out [of school] and write another one.”