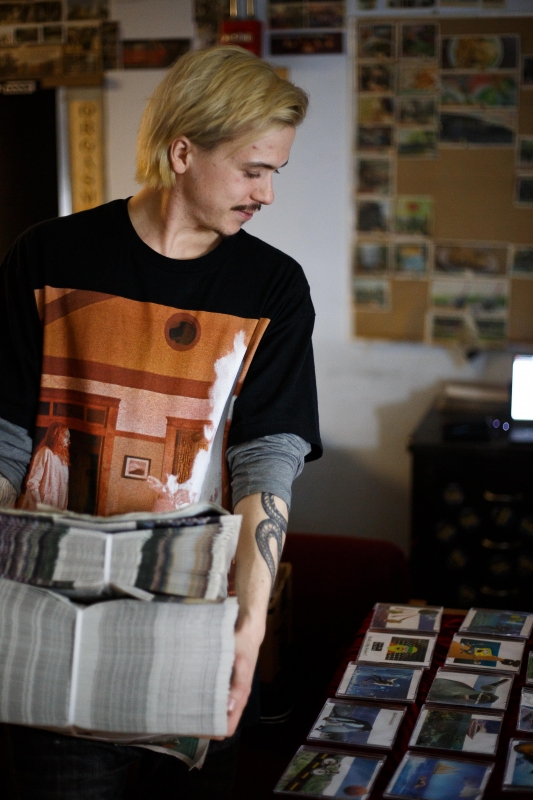 It’s a strong tie between two classes, both taught by master poets: Creative Writing, Poetry with Rae Gouirand and The Short Story with Greg Glazner. These classes are incredible and both professors have influenced my work in countless ways— through one-on-one mentorships during their office hours to written feedback on any/all creative works I've put in their hands. While in class, the academic atmosphere they enable is unprecedented; their syllabuses provide a ladder to some of the best literature the eyes can behold, and their lectures are a remedy for the soul. But really, it's the in-class discussions that win me over; when a professor supplies the petrol for philosophical debates between classmates, it’s a good time. And that's what I love— a course that poses its students against the unanswerable questions about literature and life.

I decided to opt out of a minor and go with the double emphasis (creative writing / literary criticism and theory). I'm just trying to get the most out of an English degree that I can— as to why: I love writing, but to be a good writer, it’s imperative to be an even better reader, hence the double emphasis.

Tell us more about your involvement around campus! This can include student organizations, clubs, or other events you've worked on. Please be as detailed as possible about what you did and your experiences.

I am a writer for the arts and cultures desk at The California Aggie, I'm a submissions committee member for an upcoming literary magazine called Open Ceiling, and I'm in independent studies with Joe Wenderoth, who’s helping me put together a little book of my poems and non-fiction stories.

Please share with us the unconventional path that has lead you to become a student at UC Davis. If possible, describe the obstacles you have faced while simultaneously working a full time job and pursuing an education.

It's a difficult path to get to a UC as a high school dropout, but it's possible, nonetheless. Although, that path becomes a bit more difficult when you (still currently) remain on academic suspension at a third of the community colleges in Fresno county due to an insufficient GPA. I had to move to Sacramento to find a community college that would accept me so I could make my way here. Long story short: as a first-generation college student, work was forever the priority while school sat on the back burner, but these dispositions did not keep me from trying my hand at college while still working full-time. After six years of seemingly perpetual bad grades, I finally got to a financial state that allowed me to move away from Fresno and wholeheartedly dedicate myself to school, which led my acceptance at every UC in the state, which was pretty cool. But there still remains a nostalgia within me for those long hours spent inside a lumber yard, or those overnight shifts at the factory. I cherish the memories, but not the physical toll those memories took on my lower back.

Describe the ethnographic work you have done in the Greek countryside. How did you incorporate your interest in archeology, anthropology, and English into this project?

Before transferring to UC Davis, I studied anthropology, which is a great precursor to English because it allowed me to study the idiosyncratic nature of humanity before breaking into its themes. Ideas that ultimately contributed to my decisions to attend, then leave, an archaeological dig in Greece during UCLA study abroad program. Our project was to uncover the supposed grave of Philip II of Macedon, and as interesting as that was, I was a student of cultural anthropology, so my fascination revolved more around the locals who were employed to dig in these trenches than the artifacts they were pulling out of them. I ended up gaining some close friends in the coastal village of Makrygialos and archived many our conversations about the excavation that was taking place in their backyard. Shortly after gaining these connections I left the program and decided to build my own, collecting a series of essays, poems, and stories about my travels on the Greek countryside, eastern Europe and my brief encounter with the 2016 coup attempt in Turkey.

Why major in English? What would you like to do with your degree?

The goal is to use my credentials and the knowledge I've gained as an English major to apply to an MFA program for creative writing on the east coast. From there, I’d like to hide away in a bookstore, work a 9-5 job, make music, write and live out the rest of my days.

Student of the Month: Ariana Green