We Are English Majors: Emily Stack 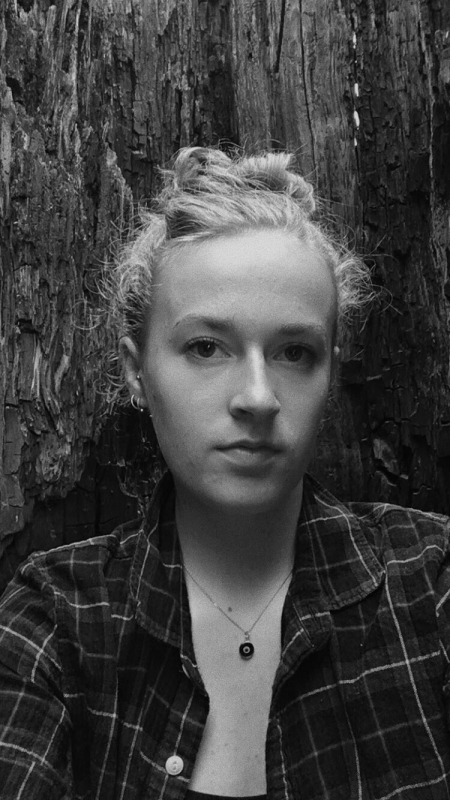 It's next to impossible to pick just one -- there are more than a few English classes that spring to mind as particularly important and memorable. My (very patient) family and friends can attest that early modern literature and culture now consume roughly 85 percent of my waking thoughts, and they're wary of mentioning even tangentially related topics in my presence for fear of setting off one of my extended discourses on 500-year-old crossdressing practices or how 16th-century people felt about dirt. Gina Bloom and Frances Dolan bear partial responsibility for this state of affairs, since it was their delightful and brilliant ENL 117 - Shakespeare classes that engendered my fascination-cum-obsession with the early modern world. The knowledge that I gathered and the questions that I started asking in those two classes have become the focus of my English honors thesis and my research and scholarship more broadly; I'm pursuing an academic career as an early modernist in no small part because of those classes. I also find myself carrying much of what I learned and continue to learn from early modern studies into my life outside of the classroom, and I'm frequently pleasantly surprised by how much practical guidance and wisdom I find in texts and a world that, at first glance, strikes many as impossibly distant. I would be remiss if I didn't also mention Matthew Stratton's ENL 10C class for introducing me to "Mrs. Dalloway," which shook me to my core as an adrift, confused, and questioning 18-year-old and was formative for me in scholarly as well as deeply personal ways.

I considered a double emphasis when I started college, but I pretty quickly became wholly enamored of literary criticism and found my niche there. Criticism and theory is a very natural fit for me, both because I find critically analyzing cultural objects endlessly satisfying and because writing essays for English class is the only thing I'm good enough at to make a viable career out of. I also realized that a creative writing emphasis would require me to actually, you know, write things instead of just thinking about the things I would write if I were a writer. I mean, 2018 was the third year in a row I signed up for NaNoWriMo and then didn't write a single word. I admire creative writers and I have no idea how they do it.

Describe your work with the California Aggie and how your degree in English has helped you succeed in this field.

I started working at The California Aggie at the beginning of my freshman year as a copy editor and worked up through the copy desk to somehow land myself in the editor-in-chief's office this year. I can't say whether I've succeeded in the field -- that's really up to my coworkers and The Aggie's readers -- but what's made my work satisfying and carried me through demoralizing moments is the acute awareness of the importance and privilege of producing texts. Having a vibrant student-run newspaper is politically important in the moment; it's crucial that our only source of information about the university isn't the university itself, and that there's an independent critical voice on campus, and that young people are trained in the great and good work of journalism. But it's also important in the sense that how students understand their world and record it in the moment is vital information for the historical record. You can look back at issues of The Aggie going back to 1915 and see what young people thought was important enough to warrant coverage and front-page attention. That's important material for the hypothetical historian from 2500 who wants to understand 2019. I can't say for sure that future scholars will turn to The Aggie as primary source material, but who knows? The anonymous writers of broadside ballads in 1600 probably didn't think scholars would study their work either, but here we are. For me, working with the early modern period is a good reminder of the lasting power of the written word. What we write now may matter far into the future, so we'd better make sure that what we write now are things we'll be proud of having our names attached to long after we're gone. The acute awareness of permanence that literary studies has given me guides many of my decisions, and I hope it keeps me thoughtful and honest as a journalist.

Tell us about your Play the Knave internship through the English department, and how other students may get involved.

I got involved with Play the Knave, a Shakespeare video game, at the beginning of last year. I surprised myself by applying because I'm a bit of a technology skeptic, especially when it comes to education, but working with the program opened me up to a lot of new possibilities in teaching and research and first got me thinking about digital humanities. One of the things I like about Play the Knave, and digital projects more generally, is that they really do take a village -- naturally there are a lot of English and education majors working on the pedagogy side of the internship, but we also have a whole crew of computer programers, designers, engineers, and coders who keep the actual game platform up and running. Play the Knave is a really wonderful example of interdisciplinary work and the potential for productive, interesting STEM/humanities collaboration. And working on Knave brings me into contact with a lot of smart, fun, delightful people, from the other members of the team to the K-12 students we work with.

Over the past two years, you have volunteered at a summer camp in which you help lead creative writing workshops to students K-8. Tell us more about this experience and how your work with young students has shaped your own education.

Working with kids is such a mixed bag. On one hand, children can be shockingly wise, and I'm often blown away by their perceptive natures, their human goodness, and their brilliance. On the other hand, a significant amount of my job involves preventing otherwise intelligent young people from jamming their fingers into electric pencil sharpeners. Children have presented me with drawings of the two of us, which is perhaps one of the purest forms of love on this earth. I have also had to hold another human's bloody, spitty tooth in my hand a non-zero amount of times. Hearing a sentence like "Please do not lick your neighbor's iPad" leave my mouth before 9 a.m. no longer fazes me. My students sometimes say things that are so hilarious that I have to step out of the classroom to catch my breath from laughing. Or they yell utterly incoherent knock-knock jokes while I'm in the middle of giving instructions. Teaching is mentally, physically, and emotionally exhausting and I love it more than anything. Working with middle-school students, my primary age group, became more rewarding when I started to realize that amount of similarities between the awkward, uncertain, confusing years of middle school and the awkward, uncertain, confusing years of your early 20s. The scope and scale of our issues are different, but my students and I are both dealing with outgrowing old friendships, establishing new boundaries with our parents, trying to sort out our self-identity, figuring out our values, and a whole host of other conundrums. I think it helps them to see that adults, including their teachers, are wrestling with the same issues they are and that they don't have to be in a rush to figure it all out. (I don't know if it helps me to see that a decade later, I still have the same problems I had in middle school, except now I also have to do my own laundry.)

You were given the opportunity to present research at the 2017 and 2018 UC Davis Undergraduate Research Conference. Describe your research, and how the English department assisted you in this opportunity.

My first presentation was about Chaucer's Wife of Bath's Tale, from The Canterbury Tales, and how we read and understand male-authored female narrators who in turn author their own stories within the text. I argue that the presence of the male narrator doesn't ultimately have to disempower the female character, and in the context of her being a storyteller in her own right she's immensely powerful. I wouldn't have been aware of the existence of the Undergraduate Research Conference had Sara Petrosillo, who taught the ENL 10A class that the presentation began in, not suggested it to me. My second time at the conference, I presented a paper about "Absalom, Absalom!" and how women's bodies transmit history and structure throughout the novel and are really the means -- despite an ostensible focus on paternity -- by which identity, particularly race, is created, maintained, and understood. That presentation began as a final paper for ENL 186 with Elizabeth Freeman, who's been a wonderful mentor and guide throughout my time in the English department and was endlessly patient with my inability to shorten my paper to a reasonable length to be read in a ten-minute URC talk. With any luck the conference will let me back again this year and I'll talk about Shakespeare, tragedy, theater history, and dirt.

Please share with us any awards or recognitions you may have received for previous works of literature. In what ways did the English department assist you in receiving these recognitions? What advice do you have for other students hoping to enter writing competitions?

My best advice is to submit early and submit often. I have first and second-place awards from the English Department Essay Contest, a paper forthcoming in Prized Writing, two Undergraduate Research Conference presentations, and admittance to the English critical honors program. I was certain I was under-qualified for all of these honors and awards when I applied for them. Apply even if you feel unqualified! The most important thing is to not let the fear of being turned down prevent you from applying at all -- long-term regret about missed opportunities is far, far more painful than the temporary sting of rejection. Friends and mentors in the English Department -- faculty, grad students, and fellow undergraduates alike -- were instrumental in helping me get over the powerful fear of rejection that was preventing me from sending my work out into the world.

You are a member of various honors societies on campus. Tell us about these, their mission statements, and how your involvement has altered/shaped your education at UC Davis.

Prytanean Women's Honor Society is a really fantastic group of women who are both academically high-achieving and committed to community service. I'm constantly impressed by the accomplishments of the other Prytaneans, and I think there's a lot of value in the kind of supportive, hardworking, multi-generational, socially-engaged community of women that Prytanean fosters. The English Department critical honors program has been an absolute joy thus far. I'm in the early stages, along with 14 other undergraduates, of putting together a 25 to 35-page critical thesis, a page count which is both daunting and exciting. My project examines the role of the earth as a female figure in Shakespeare's tragedies and what that figuration does to our understanding not only of tragic plays but also of the theater space itself, the real material ground upon which these plays were performed and viewed; my research draws on a diverse body of scholarship from feminist and embodiment theories to ecocriticism and theater history. I have a wonderful thesis advisor in Gina Bloom and an excellent honors cohort to work with, so I'm just as happy as a pig in slop.

Student of the Month: Ariana Green