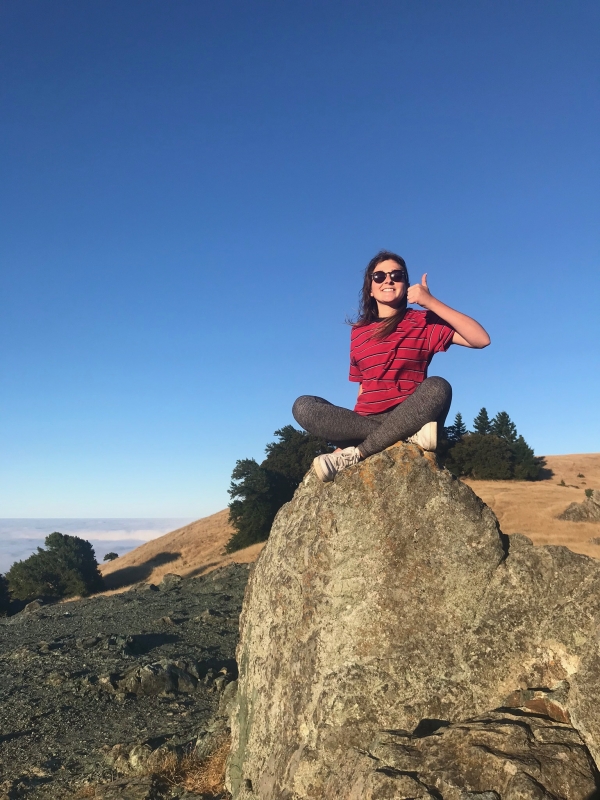 Last year during my spring quarter I had the privilege of taking Tobias Menely's 188A Eco-theory seminar on weird nature and Matthew Stratton's 160 Film as Narrative: Shooting Fascists. These two classes collectively created my most memorable quarter at Davis because they appealed to two different interests of mine that I had not gotten studied in the English department before: climate change and film. I've taken a few classes on climate change through the Geology department, but getting to read eco-theory and learn how theorists confront the dilemma of addressing and writing about the changing climate, and then applying those theories to literature on "Weird Nature" was one of the most thought provoking and enjoyable classes that I have ever taken. Getting to take a seminar with Tobias, who I had taken other classes with prior, was also a really memorable experience because I really enjoy how Tobias lectures and leads his discussion; it was so exciting to get to take a smaller seminar with him on a topic that he is so extremely knowledgeable about. In addition, taking ENL 160 with Matthew Stratton was the most fun I have ever had in a classroom, because each week we would watch a new movie and then the next class we would discuss it for three hours. Having the opportunity to analyze film and write about it in an English classroom reminded me that the things I enjoy and am passionate about can always be applied within my major. These classes were both extremely relevant and applicable to how I think about the environment, literature, and film, and since taking them I have continued to search for more literature, theory and films build off of what I learned in Professor Menely and Professor Stratton’s class in hopes of preserving and furthering the knowledge and education that these two professors provided me with.

Tell us about the experiences you have had through your time as a writing tutor with the Student Academic Success Center and an opinion writer for the California Aggie. How has your involvement in the English department helped you succeed in these endeavors, and vice versa?

I began working as a writing tutor my second year at Davis and since then it has become one of my favorite things to do. In terms of how it has affected my English career and vice versa, working as a writing tutor has required me to understand how to edit other people’s writing which has directly helped me with my own editing process, but most importantly this job has provided me with the ability to articulate and explain different elements of the writing process and English grammar to other people. Before this job, I had never thought about the different ways of explaining writing and grammar to other people, and because of that I had never really reflected on my own process of writing beyond just editing my own papers. In addition, many of the papers that I read are personal narratives or opinion essays, and in doing so I have been exposed to so many different stories and experiences that I am honored to have gotten to read. This job has further taught me the power of writing and the importance of sharing ideas, and it has very much helped me with my own writing and expression. Last year I was a humor writer for the Aggie, which was an incredibly fun outlet because I had the opportunity of sharing my own opinions and thoughts through the mask of humor, which was a little less scary and serious. Often times my humor articles were based off of things I had read about or discussed in my class, that changed the way I think about the world, and it was really awesome to try and figure out how to satirize or draw attention to things via writing. This year I am an Arts writer for the Aggie which is a lot different than humor, because I often have to conduct interviews and attend community events instead of making things up, but it has been an incredible way of engaging with different forms of art within the Davis community. My English major has helped with this, because even though I am not writing essays when I write for the Aggie, when I sit down to write an article I think of a sort of thesis in my head that I am trying to convey through my article and then follow that idea, which I think is a direct application of my major into journalism. I really enjoy working for the Aggie because it is another community where I get to practice and improve my writing, while learning new things about journalism and expression.

Describe your involvement in helping to launch the newly created Play the Knave Shakespeare video game. What advice would you give to students interested in the game?

Play the Knave is an awesome video game that focuses on performing and engaging with different Shakespeare plays. I joined Play the Knave last spring and was on the play testing side of the video game where I would read off the scripts and make sure they were all at the correct speed for the level of the game as well as check for any typos and errors. Whenever I go into the lab and playtest this game I always think about how much I would have loved getting to play it in elementary or middle school, which I think testifies to how incredible and thoughtful Professor Bloom’s idea and development of this game are. This game is fun for all ages, and what’s really great about it is that since it is through the Xbox connect which doesn’t have any remote, you get to act out your avatar on screen while reciting your lines at the same time. I really like that there are different modes in the game and different paces, so anybody can play and choose what Shakespeare plays or modes of story they want to do. In addition there are options for single players and group scenes, which are both really fun to do. I think this game is so important, because Shakespeare is really fun and a lot more accessible to all ages than I think a lot of younger kids feel, and having a game that can help teach kids how to enjoy and interact with Shakespeare is really important.

Describe some of the memories you have created while volunteering as a Camp Kesem counselor and a Best Buddy. Please tell us how you get involved with these two organizations, what their mission is, and how you plan on using these experiences in future endeavors.

Camp Kesem and Best Buddies are two volunteer organizations that I have been involved with since my freshman year of college. Camp Kesem and Best Buddies are both non-profit organizations that are present on many college campuses. Camp Kesem is a completely free summer camp for children whose parents have been affected by Cancer, and during the year I work with a group of a hundred other UC Davis students and counselors to fundraise, train and prepare for Camp. This organization has provided me with life long friendship and experiences that have truly shaped who I am. Best Buddies is an organization dedicated to ending the social, physical, and economic isolation of people with intellectual and developmental disabilities. I have been paired in a one-on-one friendship with my Best Buddy Paul for the last three years and we meet once a week to hangout and catch up and also attend larger Best Buddy events together. I am so humbled to be apart of these two organizations, and while I originally joined them both because of personal connection and past experience with the causes, the people I have met have taught me so much about kindness, empathy, and community. I know in the future when I graduate college I still want to be involved with Camp Kesem and Best Buddies because I want to continue giving back everything they have given to me., and I would like to hopefully go to law school and go into a field of law that helps advocate for children and other groups of people that are unrepresented or unaccounted for.

Alongside all of your academic and volunteer activities, you are also an Outdoor Adventures Backpacking Guide. How does this job help balance your social life versus academic responsibilities?

Outdoor adventures is a really cool group on campus that leads backpacking trips for any level or interest in the outdoors. I went to guide training my second year at Davis after having done a backpacking trip that summer, and through guide school I met a lot of incredible people who were passionate and experienced in guiding and being outdoors. I don’t get to guide as many trips as I would like to because school and other commitments occur, but the training taught me a lot of really valuable skills about being able to lead a backpacking trip and all the various things that need to be accounted for. I think it’s really fun to know that there is a welcoming community of guides and other students who want to do similar things, and I hope to lead as many trips as I can before I graduate college.

Why major in English? What would you like to do with your degree?

I came into UC Davis as an English major because I liked reading books and had enjoyed my high school English classes, but in all honestly I was not sure it was something that I was going to stick with all four years. Upon taking my first class of fall quarter freshman year (10A with Professor Chaganti), I realized immediately that majoring in English was the right choice. For me, it is the classroom setting that encourages such an enlightening form of discussion and sharing of ideas that interests me so much in English. Every single English Professor I have had has been interesting, welcoming, and passionate, and I truly look up to all of them. My favorite thing about the English major is that it has completely changed the way that I look at the world. While I think this can be said about every major at Davis, my passion for the English major comes from its ability to introduce completely original and new ideas through literature, theory, and discussion that I can then attempt to apply to my own thinking, or at least to other pieces of literature that I read. I can't even fully articulate how grateful I am for what I have learned from every single professor I have ever had, and every English class that I have taken, but I know when I leave Davis the things I will miss the most are the unique learning and thought provoking opportunities that exist within these English classrooms. Moving forward, I am planning on applying to Law School next year, and I believe my degree has prepared me for the next steps to come in terms of engaging with reading materials and articulating my thoughts and arguments through my writing. Most importantly though, regardless of what I do, I know the English major has provided me with tools and a foundation for how I engage with the world around me, and while there is so much left to experience and learn about, I know I will always use what I have learned in my English classrooms.

Indigenous Studies for Decolonized Futures, or What the Frick Are We Supposed to Do Now? (Hint: Give the Land Back)
Graduate Writer's Retreat
Beyond the Ivory Tower: Outreach and Public Engagement in the Social Sciences
see more events