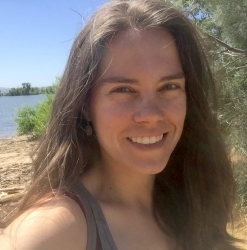 My work asks how research into the human microbiome, the teeming collection of microorganisms living in and on the human body, is driving dramatic reassessments of microbial life in contemporary American science and culture. In my dissertation, Ruptures: Life without Germs in the Microbiome Era, I argue that the idea of the microbiome has been conceptually structured by historical assessments of life without microbes — both in the material bodies of germfree laboratory animals, and in the nightmarish prospect of humans in germfree spaces. I study historical and contemporary texts in microbiology, science fiction, and popular science writing to show how the germfree body represents ruptures of both ecological and social cohesion: rifts that must be repaired through living deliberately with microbes.

I hold a BS in Microbiology with a minor in Biology from Penn State and have worked on research projects in a variety of areas: virology (Kaposi’s scarcoma-associated herpesvirus), bacteriology (Bordetella pertussis, i.e., whooping cough), tissue culture (stem cells and other models, including HeLa cells), and reproductive endocrinology. I also hold an MA in English from North Carolina State.

I am affiliated with UC Davis ModLab.

My CV is available here.

"Are Clusters Races? A Discussion of the Rhetorical Appropriation of Rosenberg et al.'s “Genetic Structure of Human Populations." Philosophy, Theory, and Practice in Biology 9.12 (2017).

"Corporate Agriculture and the Exploitation of Life in Portal 2." Games and Culture 2016.

“Originating the microbiome: Joshua Lederberg and Microbiology’s Self-Narration at the Advent of the Human Microbiome Project.” History of Science Society: November 2018, Seattle, WA.

"Circular Logic: Tree of Life Diagrams and the Visual Proliferation of Microbial Life." Society for Literature, Science and the Arts: November 2017, Phoenix AZ.

“Envisioning Amphibiosis: Theodor Rosebury and Redemptive Microbiology at the Advent of the Human Microbiome Project.” Society for Literature, Science and the Arts: November 2015, Rice University

“Physiological Aesthetics and the Reasoning Mind in Joseph Priestley’s The History and Present State of Electricity.” Western Society for Eighteenth-Century Studies: February 14, University of California, Davis.