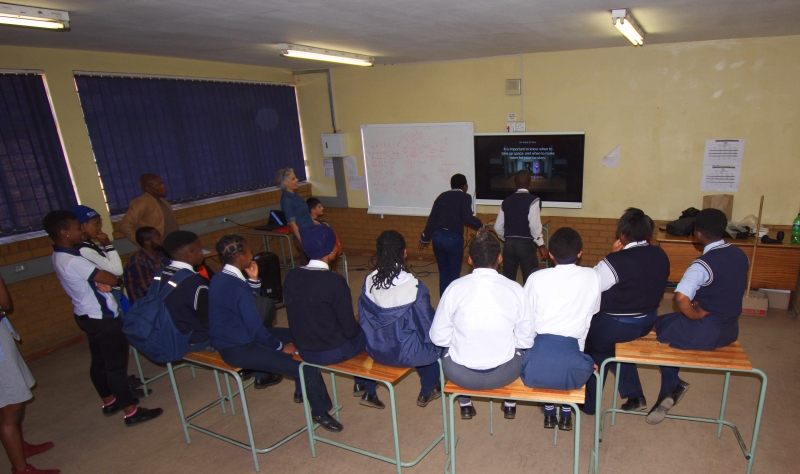 Earlier this fall, Professor Gina Bloom took the augmented reality video game Play the Knave on the road to the Thuto-lore Comprehensive School in Sharpeville township, an hour outside Johannesburg in South Africa.

“I also demonstrated the game to staff at an after-school program in Alexandra township and left a kit with them to use this month,” Bloom reports.

In the game, a Kinect motion capture camera lets players use their own bodies to act out scenes from Shakespeare’s dramas, karaoke-style.

The game has been demonstrated around the nation and the world, but this is its first showing in South Africa.

Thanks to a generous donation from retired teacher and UC Davis alumna Margaret Bowles, the UC Davis English department has run a program to bring Play the Knave into Northern California K-12 schools as well.

Professor Bloom's book on playable media and the theater, Gaming the Stage, was Runner Up for The Association for Theatre in Higher Education (ATHE) Outstanding Book Award, Finalist for the George Freedley Memorial Award from the Theatre Library Association (TLA), and received an Honorable Mention for the David Bevington Prize offered by the Medieval and Renaissance Drama Society.

Indigenous Studies for Decolonized Futures, or What the Frick Are We Supposed to Do Now? (Hint: Give the Land Back)
Graduate Writer's Retreat
Beyond the Ivory Tower: Outreach and Public Engagement in the Social Sciences
see more events