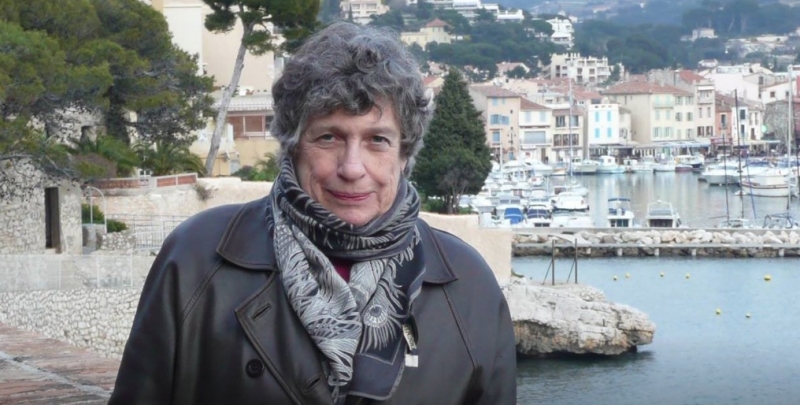 We took the opportunity to catch up with Professor Gilbert and ask her a couple of questions about her career and her ongoing work in feminist literary criticism and poetry.

First, we asked about writing across genres, which has been a hallmark of Gilbert’s career since 1979. That year, she published her first volume of poetry, In the Fourth World, and her first work of literary criticism, The Madwoman in the Attic, written with her longtime collaborator Professor Susan Gubar of Indiana University.

As you’ll read below, the story goes even farther back to Gilbert’s undergraduate days at Cornell University. There, one of her best friends was the noted science fiction writer Joanna Russ and her mentor was the field-defining literary scholar M.H. Abrams. Russ gave her “some rather autocratic advice about imagining ‘other worlds,’” Gilbert recounts, while Abrams taught her “how to write literary criticism, how to think about literary history, and (although he might deny this if he were still with us) how to be a feminist critic.”

We also asked Gilbert about what it means to be a Northern California writer and about how she found a home among the poets of the Bay Area. Here, she writes, “we inhale the fog together, we go to bookstore readings together, and inevitably we share in all the Northern California literary gossip together!” Meanwhile at Davis, Gilbert’s colleagues and students provided her with lasting friendship and inspiration, as you will see below.

We are grateful that Professor Gilbert continues to support the department’s students through the Elliot Gilbert Prizes in both creative and critical writing, which are awarded annually in the name of her husband, who as Department Chair meaningfully shaped English at Davis.

First, What do you learn from working across genres and, in so doing, addressing different audiences?

I think I’ve always worked across genres, at least since I started high school, if not before. Writing poetry seemed inevitably to inspire efforts to write fiction, and for years I banged away at my old Olivetti writing short stories, even some science fiction. One of my closest friends at Cornell was Joanna Russ, who would now and then give me some rather autocratic advice about imagining “other worlds.” But more and more at Cornell I came under the influence of M.H. Abrams, who became a wonderfully supportive mentor. It was from him that I really learned how to write literary criticism, how to think about literary history, and (although he might deny this if he were still with us) how to be a feminist critic. I always thought of him (and he knew it) as “Uncle Mike”--and then, because he was also a mentor of Harold Bloom, I thought of Harold (whom I don’t know well at all) as “Cousin Harold.” There was a certain way of reimagining literary traditions that I grasped from knowing their superb works.

How did I write poetry too? I believe that most of the poetry I wrote was somehow coterminous with my critical and creative prose. When I was working on my dissertation about D.H. Lawrence’s poetry (a somewhat revolutionary act at that time) I was heartened by Bloom’s writing about Lawrence and helped by Abrams’s way of thinking about the convolutions of literary tradition. No, it wasn’t inevitable that we all needed to dismiss DHL’s poems by examining them through the new critical lenses of T.S. Eliot, Cleanth Brooks, and Yvor Winters. At the same time, it did seem curiously inevitable that I should be so steeped in Lawrence that I’d begin writing vaguely Larentian short stories and more relaxed, less formal poems than I had earlier done.

From that point on, my critical work has always been balanced--or do I mean enriched?--by my creative work. When Susan Gubar and I were writing The Madwoman in the Attic, I was obsessed and nearly intoxicated by women’s history, and produced a book of poems, Emily’s Bread (referring to the two Emilys, both of whom baked!). When I was working on Wrongful Death, my sorrowful account of my husband’s death due to an “adverse medical event,” I also wrote Ghost Volcano, a set of elegies for him. And then Ghost Volcano itself triggered an obsession with elegy and mourning as literary events which led to my large project, Death’s Door: Modern Dying and the Ways We Grieve--which itself led to more experiments with elegiac poetry (in, for instance, Belongs and Aftermath and even in my latest collection, Judgment Day.)

Second, I wonder what it means to you to be recognized as a vital participant in the Northern California writing community? What aspect of your contribution to that community has proven most important to you over time?

Well, it truly meant (and means) the world to me to be recognized in this way by the Northern California Writing Community. As you may have heard, I started my literary career (at age 4!) writing poetry, but later, for many reasons, including my own enthusiasm for teaching and learning, moved into the academic community. But my own secret self-definition has always been that I am or should be a poet.

I’ve now been living in my Berkeley house for 50 years (!!!--we bought the house, yes, in 1969) and in all that time I’ve been fortunate to find myself among a circle of congenial poets. I think I’ve been in at least three different poetry “workshops,” including my current one, which was founded at least forty years ago. Over the decades our group included Josephine Miles, Carolyn Kaiser, Robert Pinsky, Chana Bloch, Diana O’Hehir, Mark Turpin, and numerous others, including (now) Peter Dale Scott, Jeanne Foster, Beverley Bie Brahic, Phyllis Stowell, David Shaddock, and Davis Professors Alan Williamson and Katie Peterson. We’ve all been happily part of the Berkeley poetry community, reading (years ago) at Cody’s and Black Oak [bookstores], more recently at the Albany and Berkeley libraries, at Mrs. Dalloway’s and other bookstores in the Bay Area. We are connected in reverence for Joyce Jenkins, the indomitable editor/publisher of Poetry Flash, and when various visiting poets pass through town we often invite them to join in a meeting of our group. And of course we’re glad to be a part of a community that also includes friends of ours like Brenda Hillman and Bob Hass.

Although I spent many gratifying years teaching undergraduate and graduate poetry workshops at Davis, and often read on campus or at nearby venues, I have to admit that my poetry friends in Berkeley are the ones who have made me feel, as the saying goes, “linked in.” After all, we inhale the fog together, we go to bookstore readings together, and inevitably we share in all the Northern California literary gossip together! Frankly, I think it would have been harder to feel so connected if I had been living in Davis--although, at the same time, teaching at Davis made it possible for Elliot and me to have the great gift of a long friendship with Karl and Teri Shapiro, a learning experience in itself. (Karl was a wonderful narrator of his own life as Editor of Poetry Magazine and as a combative member of the Bollingen Prize committee, where he went head to head with Robert Lowell on the vexed and vexing question of a prize for Ezra Pound.) Davis, too, brought the gifts of amazing workshop students--I think especially of Wendy Barker and Kevin Clark, who continue to publish widely and often--whose very presence in a classroom helped inspire my own work.