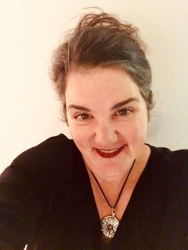 Elizabeth Freeman began her teaching career at Sarah Lawrence College, coming to UC Davis in 2000. She specializes in American literature and gender/sexuality/queer studies, and her articles have appeared in numerous scholarly journals. She has written three books,  The Wedding Complex: Forms of Belonging in Modern American Culture (Duke UP, 2002), Time Binds: Queer Temporalities, Queer Histories (Duke UP, 2010), and Beside You in Time: Sense-Methods and Queer Sociabilities in Nineteenth-Century America (Duke UP, 2019).  She was also the editor of a special issue of GLQ, "Queer Temporalities" (2007), and co-editor (with Ellen Samuels, U Wisconsin, Madison), of a special issue of South Atlantic Quarterly, "Crip Temporalities" (2021).  Between 2011 and 2017, she served as Co-Editor of GLQ: A Journal of Lesbian and Gay Studies.  She is currently working on a book project examining the reading practices accompanying care work and a co-edited anthology, "Queer Kinship" (with Tyler Bradway, SUNY Cortland).

Beside You in Time

In Beside You in Time Elizabeth Freeman expands biopolitical and queer theory by outlining a temporal view of the long nineteenth century. Drawing on Foucauldian notions of discipline as a regime that yoked the human body to time, Freeman shows how time became a social and sensory means by which people assembled into groups in ways that resisted disciplinary forces. She tracks temporalized bodies across many entangled regimes—religion, secularity, race, historiography, health, and sexuality—and examines how those bodies act in relation to those regimes. In analyses of the use of rhythmic dance by the Shakers; African American slave narratives; literature by Mark Twain, Pauline Hopkins, Herman Melville, and others; and how Catholic sacraments conjoined people across historical boundaries, Freeman makes the case for the body as an instrument of what she calls queer hypersociality. As a mode of being in which bodies are connected to others and their histories across and throughout time, queer hypersociality, Freeman contends, provides the means for subjugated bodies to escape disciplinary regimes of time and to create new social worlds.