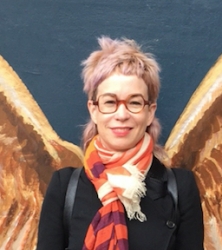 Her work on the thorny relationship of romance to the long English Reformation has appeared in article form in the Shakespearean International Yearbook  and English Literary Renaissance and as her first monograph The Fabulous Dark Cloister: Romance in England after the Reformation (Johns Hopkins University Press). Her current book project, entitled The Lithic Imagination from More to Milton, argues that the mineral (clay, rocks, stones, bezoars, iron) offers an unsettling touchstone for rethinking Renaissance humanism and literary creation. She has published on the more-than-human world as editor of a special issue of The Shakespearean International Yearbook and in articles in The Indistinct Human in Renaissance Literature, Literature Compass Online, Upstart: A Journal of English Renaissance Studies, and a special issue of Spenser Studies on "Spenser and the Human." Recently, she co-edited a never-before-printed academic drama The Converted Robber or Stonehenge, a Pastoral in English Literary Renaissance. Her co-edited collection (with Vin Nardizzi) Premodern Ecologies in the Modern Literary Imagination (U of Toronto 2019) explores how the places (local and global) where contributors research and teach shape their scholarship on Medieval and Renaissance English literature. She has also been the guest editor for a special issue of the Spenser Review  on the topic of ecological Spenser and Spenserians futures.

She was a Mellon long-term fellow at the Huntington Library (2016-2017) and Visiting Scholar at the Early Modern Studies Institute, President of the International Spenser Society (2018-2019), and co-founder and past Director of Oecologies, a Pacific Coast scholarly research collective. She was the PI for a University of California Humantities Research Institute funded multicampus faculty working group “On the Sea and Coastal Ecologies: Early Modern Pasts and Uncertain Futures” (2020-2022). Currently, she also serves as the Program Director for Medieval and Early Modern Studies (MEMS).